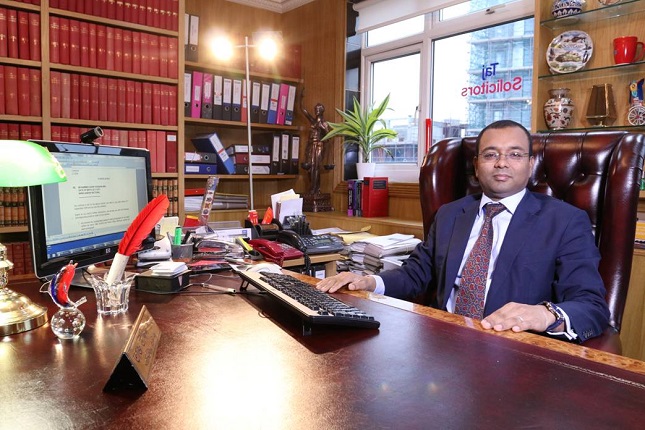 He founded the offices of Taj Solicitors in the year 2002 working from home when he was working at Clinton Davies Pallis Solicitors as a Criminal Defence Solicitor and also on Duty Solicitors panel covering North London area. On full time basis he commenced his full fledged practice from June 2003 at 229 East Indian Dock Road, Docklands where on the same road at 243- 247 the Head Office is now permanently based. Taj Shah specialises in all aspects of Immigration & Asylum Law, Human Rights, Criminal defence, Family & Children, Residential & Commercial property including related litigations. He has specialist experience in relation to Judicial Review proceedings at the Upper Tribunal and High Court.

After unprecedented success and reputation of his London office he founded two branch offices in Cardiff (since 2007) and Coventry (since 2014). In the year 2015 due to overwhelming success he opened an annex office for casework at 12 Follet Street (rear of the London Head office).

He obtained his LL.B. (Hons) degree and completed Legal Practice Course (formerly known as Solicitors Final) in 1998. He was called to the Barrister-at-Law at Middle Temple in July 1999. Since 1996 alongside with his studies he had been working in a number of legal fields.

He acted for a number of well known personalities and organisations.

His remarkable achievements includes advocating in the case of AA & Others (intention to return) [2006] which is used by Immigration Law Practitioners as authority from Higher Courts as guidelines case in relation to “intention to return”. After his success in this case the then all Sector Based Work Permits holders were able to come to the UK through direct entry clearance and/or appeal process. A further land mark guideline case was Ahmed (Proof of Benefits) [2013]. This settled one of the most complex areas of Immigration Law as commented and highlighted in many legal journals and the law widely established that settled spouse/ children/ relatives claiming benefits on their own right should not affect sponsorship undertaking and cannot be treated as having recourse to public funds. Further in the same case the Home Office was directed to change certain sections of their certain entry clearance applications as it was not consistent with the Immigration Rules and some declared policies.

He dealt with an assignment of lease matter where Dockland Light Railway is the landlord and he was defending one of the leaseholders where there was an absolute restriction on transfer of lease and the case was settled out of Court. He is proud to represent a significant number of Indian Restaurant owners (over 400 listed regular clients) all over the UK.

On a number of occasions he picked up certain mistakes in Home Office application forms which are not consistent with Immigration Rules and Practices. He wrote to the Home Secretary & Immigration Minister in relation to their departmental errors. The mistakes were admitted and immediately the forms were simultaneously changed.

Taj Shah has so far acted for some of the high profile Political leaders and renowned journalists in asylum cases (for legal reasons their names cannot be disclosed). He acts for business and investor visa applications to come to the UK from Asian countries and some Middle East based well known families.

He worked on a most high profile case of his career and came through recommendation of his Middle East based clients. He was acting for the ex-wife and her son of a billionaire renowned prince in the Middle East UAE (Prince, Al Maktoum, the son of former ruler of Dubai. Al-Maktoum is the current Chairman of Emirate Airlines). This involved their immigration status and child custody in the UK.

He is the principal contributor of Law With N Rahman (Sky Channel 814, Saturday 12:30pm- 02:00pm) for the last 6 years which is the most popular interactive legal programme.

In his busy time he is also engaged in various national and international communities and other charitable activities. He has received many awards for such activities including his significant contributions to the community through his legal work. Although Taj Solicitors do not undertake any legal aid work, for destitute clients he has unrivalled reputation for taking clients on charitable basis.

In his leisure time he enjoys gardening, cooking and DIY work. He has travelled extensively to many countries with his wife and two children.

Today Taj Solicitors and its’ founder Mr Taj Uddin Shah is a household name in the UK and Europe.